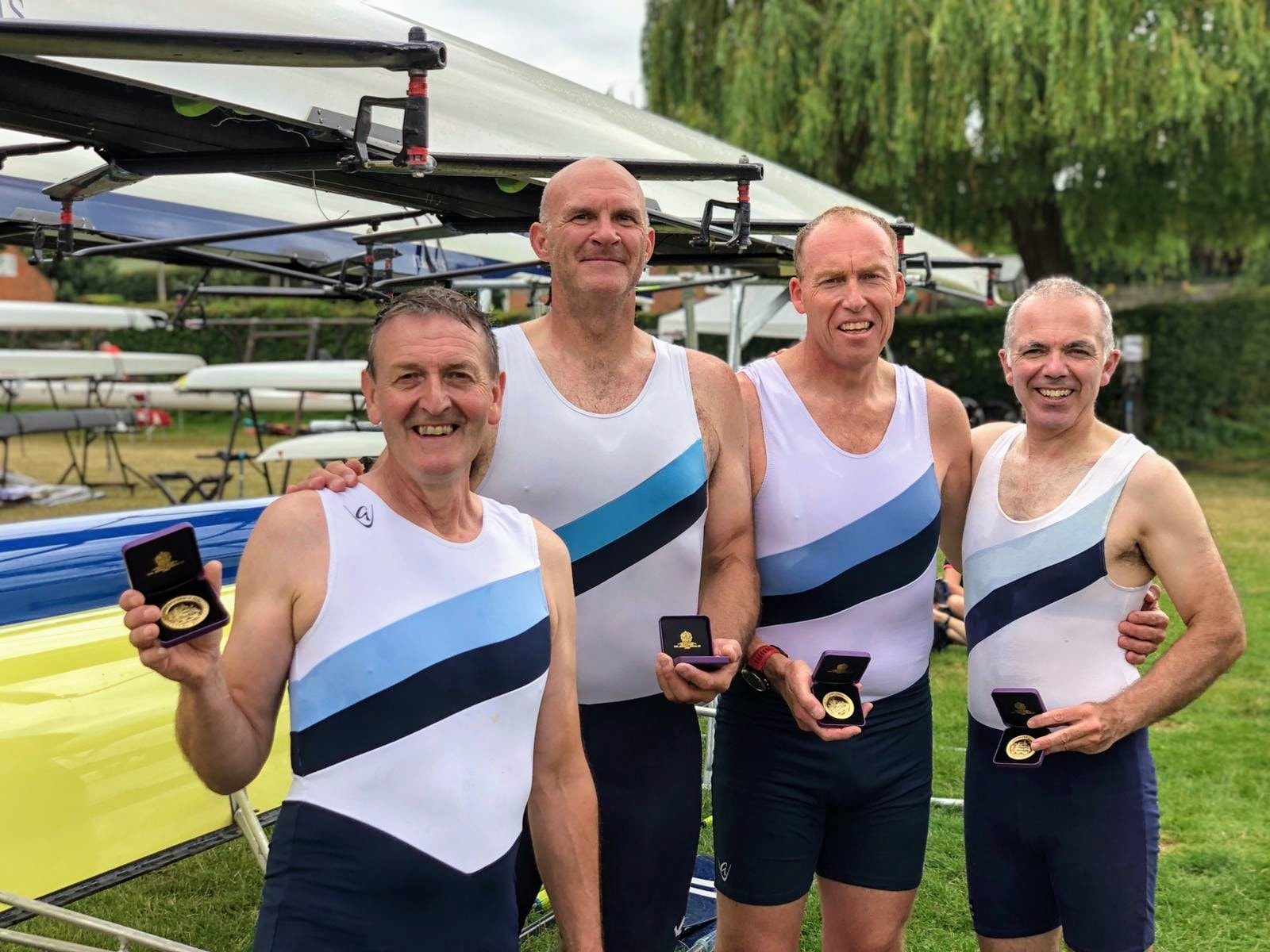 Our merry band of Masters continue to grow in depth, we now number just over forty, experience (racing and training) and age – every year counts. We don’t quite have our first octogenarian but he’s getting close!

The year got off to a cracking start at the Pairs Head in Sept. Charlie Harris and Chris Scorah through persistent chasing and harassing of crews up and down the club stretch notched up a good win in the C2- coxless pairs. While Charlie and Chris were celebrating their win the rest of the squad was getting ready for the Fours Head. The E4x of Andy, Rob A, Steve and Quintin secured a win in very choppy conditions at Upper Thames Head in October.

As the Vet Fours Head approached and given Charlie’s earlier performance (being able row a pair will Chris S chirping in his ear) he was drafted into a D4- with Steve, Rob and Roger, which after a wobbly start found really good boat speed. The rest of the squad was juggled around into competitive age-based combinations. The Fours head was notable for one thing: The D4- didn’t make it past the bandstand but they were going really fast until then (questionable if you don’t finish) we also had representation with a C4+, F4x and MxE4x all who performed well.

The eights head season started with wins at Wallingford and Weybridge (F8+), with Steve getting two wins at Wallingford by also sitting in at 3 in the Senior Men’s eight. The squad had two eights racing at Reading, G8+ and E8+, although we didn’t win we remained competitive. By rotating the eight and using the ages to our advantage we secured another win at Molesey, G8+, after some dubious time recording. At the Vets 8’s Head we had five crews, including mixed, which was a great turnout. After securing of services of the GB Women’s (8+) cox for the Head the final result for the G8+ was disappointing as we finished second by 8 secs. Conditions where challenging, various lines where taken by different crews, but overall the 8+ didn’t perform to the early season potential. This year with the introduction of quads our last-minute combination of Charlie, Ryan, Chris H and Roger secured a win by the smallest of margins in their C4x.

Post-Christmas Bedford Small Boats Head brought a win for Brian, Nick, Adrian and Jim in their G4x and Dennis, Ian, Gerard and Dave in the E4+, a good performance on a tricky course. The G4x also had another win at the inaugural Head of the East (St Neots).

As the regatta season approached, we had a number of personal challenges this year with holidays, work, recovery and family commitments which meant getting out consistent crews was going to be difficult. We had already decided not to attend the National Masters in Strathclyde but to focus on winning Henley Masters as the main goal for this year.

A E4x was formed of Charlie, Steve, Chris H and Andy but we knew Charlie was not available for Henley Masters so rotated Charlie and Roger at stroke. We also combined with other members of the squad to make up an eight. We had wins at Twickenham (E4x, F8+) and Reading (E4x, G8+) where the quad overhauled a 9sec staggered start much to the surprise of Upper Thames.

The season culminated with the E4x winning at Henley Masters: The crew of Andy, Chris H, Steve and Roger proceeded to demolish all those around them beating Talkin Tarn, Putney Town and Walbrook in the final by 2 lengths.

Post Henley Masters the squad also completed and had wins at Peterborough MC4- with Ben, Andy, Russell and Rob where they were narrowly beaten in the MC4+ by Star/Bedford. An end of year report wouldn’t be complete without mentioning Sudbury International where the squad had wins in MC4+ and M8+

The World Masters this year was held in Velence, Hungry and while we didn’t attend as a squad, we did have representation. Tony Stokes rowed in multiple H and I combinations with UTRC and Bedford/Star; unfortunately, no Golds this year.

During the year the Masters Squad had 28 individuals winning, a total of 93 individual wins across 17 different competitions which is a fantastic success. The most notable achievements being wins at the Pairs Head, Vet 8’s Head and Henley Masters, we also had the person with the most wins across the club …

Many thanks to all the supporters, trailer drivers, patient kids and other halves all of whom allow us to continue in this mad sport! As soon as one season ends another begins …