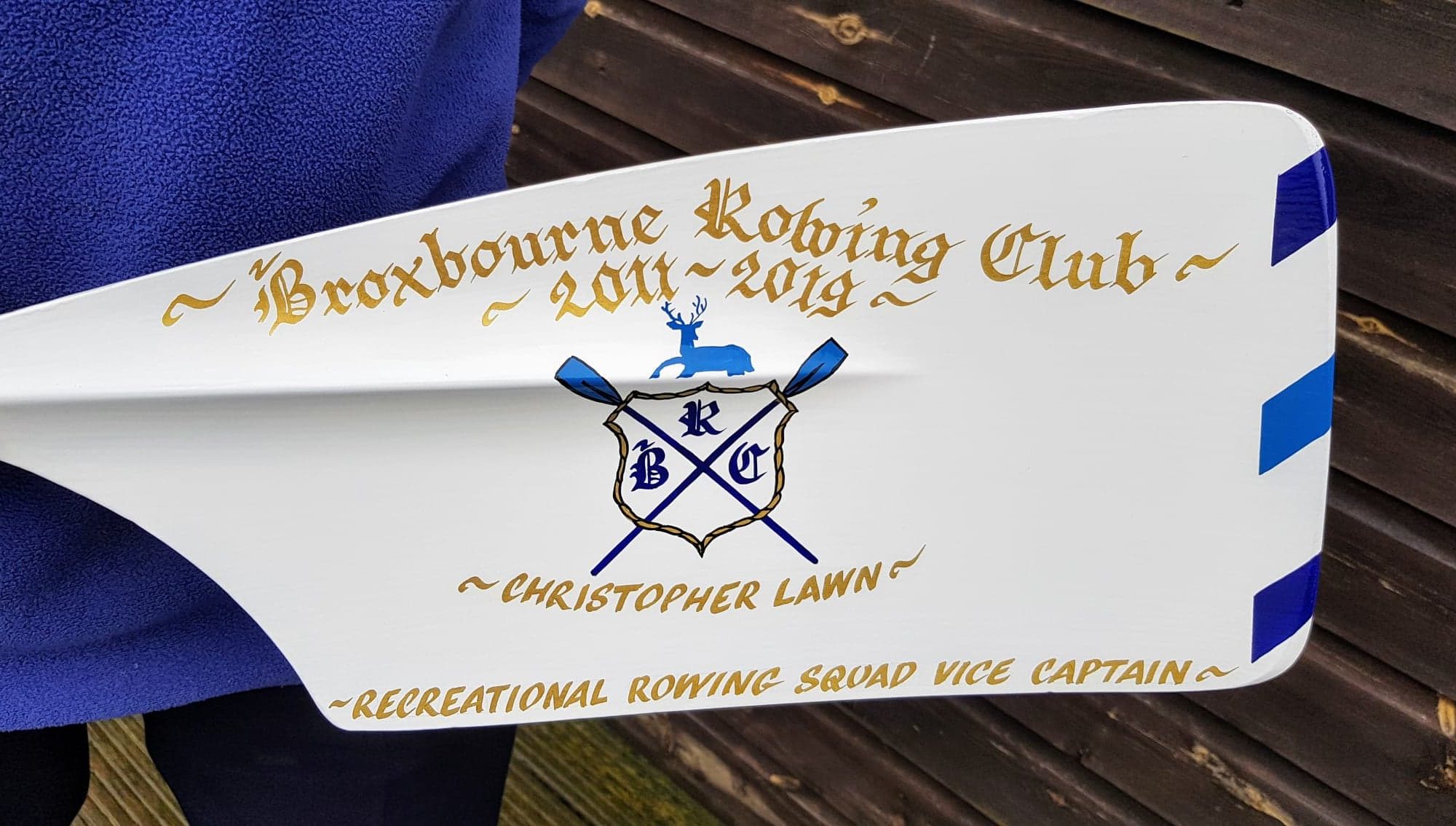 In an update to the story, originally posted on Facebook, the celebratory blade has now been received and presented to Chris, a true work of art indeed … the blade not Chris, although Chris is indeed wearing well 😜 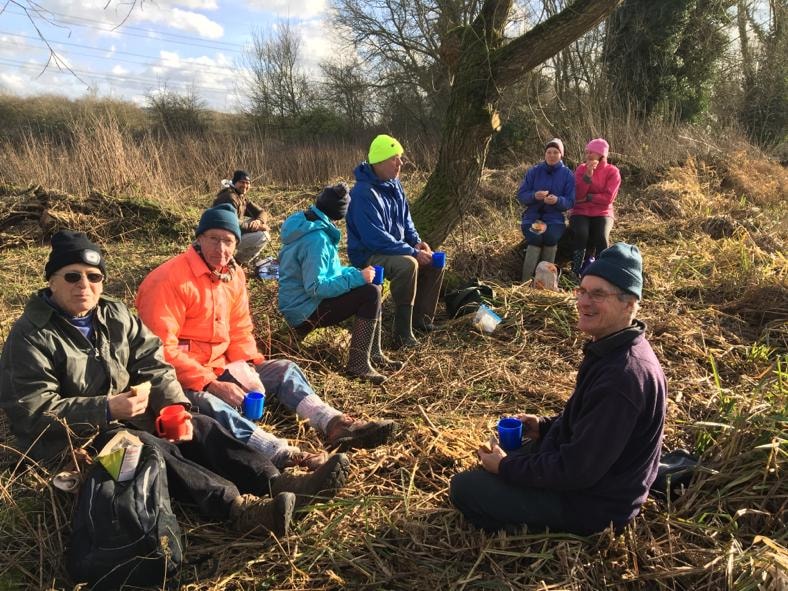 The weather was kind, the sun was out, and with tea and biscuits provided, it was a perfect day to volunteer for conservation work on the River Lee navigation near Kings Weir, Broxbourne.

Led by the Lee Valley Park Authority (LVPA) a group of volunteers from Broxbourne Rowing Club spent the day working on cutting back overgrown vegetation on the riverbank and hinterland.

Over the last couple of years, the rowing club has worked with both the LVPA and Canals and River Trust to improve the environment for both wildlife and river users. The Lea Valley Park Biodiversity team have obtained funding to adapt and improve a 2nd World War machine gun emplacement into a habitat for roosting bats.

By removing the non-native species and opening up the land to allow the light to seep through it will help local wildlife to flourish and encourage native species back into the area.

The Rowing Club embrace community spirt, and with members ranging from 12 to 80 plus years, they inspire inclusivity. They have recently added a new award called the Community Cup, this recognises the contribution that volunteers make, this can be in the wider environment such as river clearance or supporting new members learning to row.

The Community Cup is awarded to an individual who has contributed significant time and/or effort in volunteering including encouraging and supporting recreational rowing.  This includes championing the health and wellbeing benefits of the sport through an inclusive approach.

Chris Moody was presenting with the cup for his many years of running and organising the ‘Learn to Row’ courses at the club and encouraging the new rowers to follow their dreams whether it be as a member of the recreational squad or one of our racing squads.

County Councillor Mark Mills-Bishop recently visited the club for the annual Club Head racing, the event brings all the members together for a morning of fun racing. Mixing up the crews ensures everyone can take part whether they are training to race at Henley or want a light paddle down the river.

Cllr. Mills-Bishop said “This club works as a community, with members across the ages ranges working together to get the best outcomes for all. They look beyond their own club and give back to the community with their volunteering.”

New learn to row courses will be running this spring for both adults and juniors. https://broxbournerowingclub.org/learn-to-row/

We are delighted to be offering a new indoor rowing fitness class, which is part of the new British Rowing GO ROW INDOOR initiative.  It is designed for all ages and abilities so don’t worry if you have never been near a rowing machine before. Indoor rowing is the perfect whole body exercise, using 85% of your muscles. Training on these machines develops an excellent cardiovascular system, core stability and whole body flexibility. Indoor rowing is low impact on the joints, making it suitable for all ages.

Starting at Broxbourne Rowing Club, the 45 mins sessions start on Sunday 16th February at 10am giving you plenty of time to get back for your Sunday lunch.

There are limited spaces so please make sure you book with Rob in advance to avoid disappointment.
Rob Mayes 07545 545984 or via email robmay6@sky.com

Aged 12 – 17? Then this is a great opportunity to learn a new skill, be outdoors, and meet new people; full body exercise in the fresh air with new friends … what could be better?

Costing £100 for four three hour sessions, the course is taught by full qualified coaches, and will include the following, plus every participant will receive a T-shirt, Gym bag, Log book, and Certificate.

There’s an option of two course dates:
Mon 6th – Thurs 9th April      10am – 1pm
OR
Tues 14th – Fri 17th April   10am – 1pm
Please indicate which week you would prefer on the membership form. We expect to run the 2 courses but to assist us could you indicate 1 for first preference, 2 for second and X for if cannot attend make the course. If we are unable to run the only week that you are able to attend, we will of course refund the course fee.

There is, of course, a swimming requirement, which you will see on our declaration form, which is to be able to swim 50 metres in light clothing (rowing kit), tread water for 2 minutes and swim underwater for 5m.

You will also need to complete the membership form which is on the Club website https://broxbournerowingclub.org/membership/ 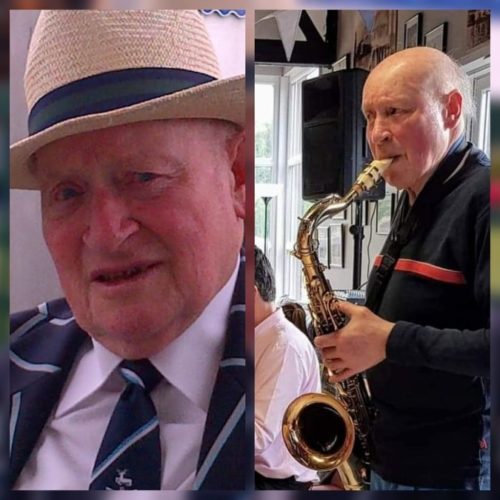 After being in poor health for the last six months, Neil Fryer, 84, died on Thursday January 16th, 2020.

Neil built a successful business career spanning 40 years with Westminster Bank, know known as National Westminster Bank, while engaging in his two lifelong passions of Rowing and Jazz. Neil’s rowing started at school, he then joined Westminster Bank Rowing Club at Putney, where he rose to become the Captain. During this period he represented the club in the Thames Cup at Henley Royal Regatta. He then joined Broxbourne Rowing Club in the early 70s, where, by using his banking business skills, became involved in helping to run the club and start building it up from the very small club it was in the 70s, to the highly successful club of 250 members it is today, with some members going on into the GB squad and attaining World and Olympic fame.

He took on the roles of Coach, Captain, Treasurer, President and finally Senior Trustee. He rowed competitively at the Club for many years. When he finished competing, Neil threw himself full time into coaching and supporting all crews wherever they were competing, in the UK or Overseas. Neil was also the British Rowing Rep for the Eastern Region for many years and a registered Umpire. His involvement and help on the administration and financial side of the club was also invaluable and continued long after stepping down from President in the 90s.

He was an incredible walking encyclopedia of rowing Facts and Figures and the main source of knowledge for hundreds of rowers who would ring him continuously for his amazing retentive memory recall. Not only could he remember who won the The Grand or Thames Cup in any particular year, he would know the individual names of all the crews also.

This unbelievable memory also extended to his other passion, jazz and music generally. One could just hum, or whistle two bars of any tune and he would immediately tell you what the title was plus the artist and lyricist. He played the tenor sax in many jazz groups right up to his death and was very well known by the majority of top jazz musicians in and around the London Jazz scene, including Ronnie Scott and Humphrey Littleton who he was friends with.

Many famous jazz musicians and singers from all around the World come and play at Broxbourne Rowing Club’s “Jazz at The Boathouse” sessions that Neil organised and put on once per month for many years. Dedicated jazz followers would come miles to listen to the top musicians at a little rowing club on the banks of the River Lea in Hertfordshire. Neil will be missed by his family and friends, plus all those rowers that regularly want facts and figures from yesteryear.

He also drove in the equivalent of the British Touring Cars, against Jim Clark and counted the legends as friends, including Colin Chapman and Bob Dance of Lotus, Eric and Graham Broadley from Lola.

Neil’s Funeral will be on Tuesday 18th Feb at 2pm at Woolensbrook Crematorium, Hoddesdon EN11 9BN and then at Broxbourne Rowing Club.